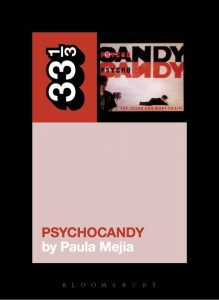 Paula Mejia is a writer, journalist and critic whose work has appeared in The Criterion Collection, NPR, The New Yorker, The New York Times, Rolling Stone!

She’s also written the next book in the 33 1/3 series on… Psychocandy by The Jesus And Mary Chain!

“…Psychocandy’s blackened candy heart center – calling out to phantoms Candy and Honey with an unsettling charm – makes it a pop album to the core, and not unlike the sugarcoated sounds the Ronettes became famous for in the 1960s. The Jesus and Mary Chain expertly carved out a place where depravity and sweetness entwined, emerging from the isolating underground of suburban Scotland grasping the distinct sound of a generation, apathetic and uncertain. The irresistible Psychocandy emerged as a clairvoyant account of struggle and sweetness that still causes us to grapple with pop music’s relation to ourselves.”

Back to News & Releases

Be the first to know about events and stuff!